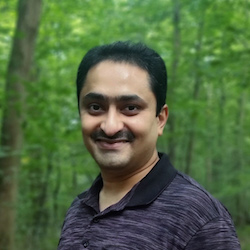 Dr. Sudarshan Gadadhar joins the Centre for Inflammation and Tissue Homeostasis at inStem. Sudarshan received his MSc in Biochemistry from the Dayananda Sagar College of Arts, Science and Commerce, Bangalore University. In 2007, he joined the Department of Biochemistry, Indian Institute of Science, Bangalore for his PhD, working on developing immunotoxins for targeted cancer therapy. In 2014, he moved to Institut Curie, Paris, France for his postdoctoral research, where he studied the role of tubulin posttranslational modifications in regulating the structure and function of mammalian cilia and flagella. His study focused on a specific tubulin modification, glycylation, that is exclusive to cilia and flagella. He established that primary cilia are also glycylated, an enigma till that time. In an interdisciplinary study, he also established the first molecular role for glycylation in mammalian sperm, which has important implications in male fertility. His work at inStem will focus on the study of how tubulin posttranslational modifications impact functions of primary cilia and their signalling pathways, thus controlling organ function and tissue homeostasis.