Ashok is the Ursula Zoellner Professor of Cancer Research at the University of Cambridge, and the Director of the Medical Research Council (MRC) Cancer Cell Unit at the Hutchison/MRC Research Centre. He is a Collaborative Science Chair at inStem and NCBS, Bangalore, and coordinates the Centre for Chemical Biology and Therapeutics there.

Ashok trained in clinical medicine at the Christian Medical College, Vellore, before completing his Ph.D. at University College, London, and his post-doctoral work at the Medical Research Council’s Laboratory of Molecular Biology in Cambridge His first faculty appointment was also in the MRC Laboratory of Molecular Biology, and he remained there as a faculty member until his election as the first holder of the Zoellner Professorship.

Ashok is internationally recognized for his research on the molecular mechanisms that preserve chromosome structure and number during cell division, and how defects in these mechanisms cause human cancer. His discoveries shed light on how chromosomal instability contributes to human cancer, provide scientific foundations underpinning new approaches to therapy, and reveal new insights into the fundamental mechanisms that repair, duplicate and segregate DNA when cells divide. Translation of these discoveries to clinical application is a major focus of Ashok’s ongoing work.

Ashok was elected a Fellow of the Academy of Medical Sciences, London, in 2001, and as a member of the EMBO European academy, Heidelberg, in 2004. 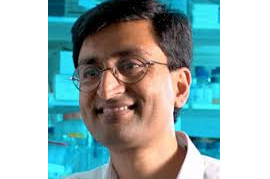