Integrins are heterodimeric transmembrane receptors that mediate adhesion between the cell and the ECM and regulate such diverse activities such as cell adhesion, proliferation, migration and ECM organization during normal development and are implicated in pathological processes such is wounding, inflammation and metastatic cancers. While each of the cellular and pathological processes is complicated, the availability of integrin KO’s as well as blocking peptides and antibodies have allowed for detailed analysis of the role of integrins in these processes and led to new therapeutic insights. Of particular relevance is a strong inflammatory and wound response that is elicited in the integrin KO mice which offers and excellent model system to address the nexus between tissue organization and signals mediating an immune response that may be involved in the process of scar less wound healing.

The primary interest of the Raghavan lab is to elucidate how integrins and their associated proteins maintain epithelial homeostasis both in development and in disease states.

Epidermal stem cells hold vast potential towards developing treatments for a variety of skin diseases, such as potentially fatal skin cancers and for skin regeneration in the treatment of burn victims and in skin blistering diseases. ??Regulation of gene expression in murine epidermal/follicular stem cells controls their ability to regenerate or differentiate into multiple cell lineages of the adult skin. Expression profiling of stem cells have revealed interesting insights into the genes that may be responsible for maintaining pluripotency or activating stem cells along differentiation lineages. However, much less is known about how these genes may be coordinately regulated in the stem cell niche. ??MicroRNAs (miRs) as global regulators of gene expression, are ideally suited to be involved in modulating the activity/expression of a network of genes involved in stem cell maintenance and differentiation. MiRs suppress gene expression by selectively binding to the 3'-noncoding region of specific mRNAs. Exquisite levels of control of mRNA expression can be attained by having one or more miRs binding to mRNAs. Given the diversity and abundance of miRNA targets, miRs appear to functionally interact with various components of many cellular signaling networks. Using miR microarrays and deep sequencing, we have identified ~50 miRs that are differentially regulated in the stem cells of the adult epidermis. We have also performed microarrays to identify genes that were downregulated in the SCs to identify putative targets of highly expressed miRs

In collaboration with the lab of Dr. Ramanuj Dasgupta, we investigate the function of microRNAs in the regulation of epidermal stem cell self-renewal and differentiation, and their interactions with the stem cell niche, with a particular focus on factors that regulate the ECM. 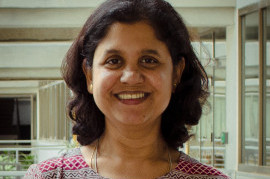