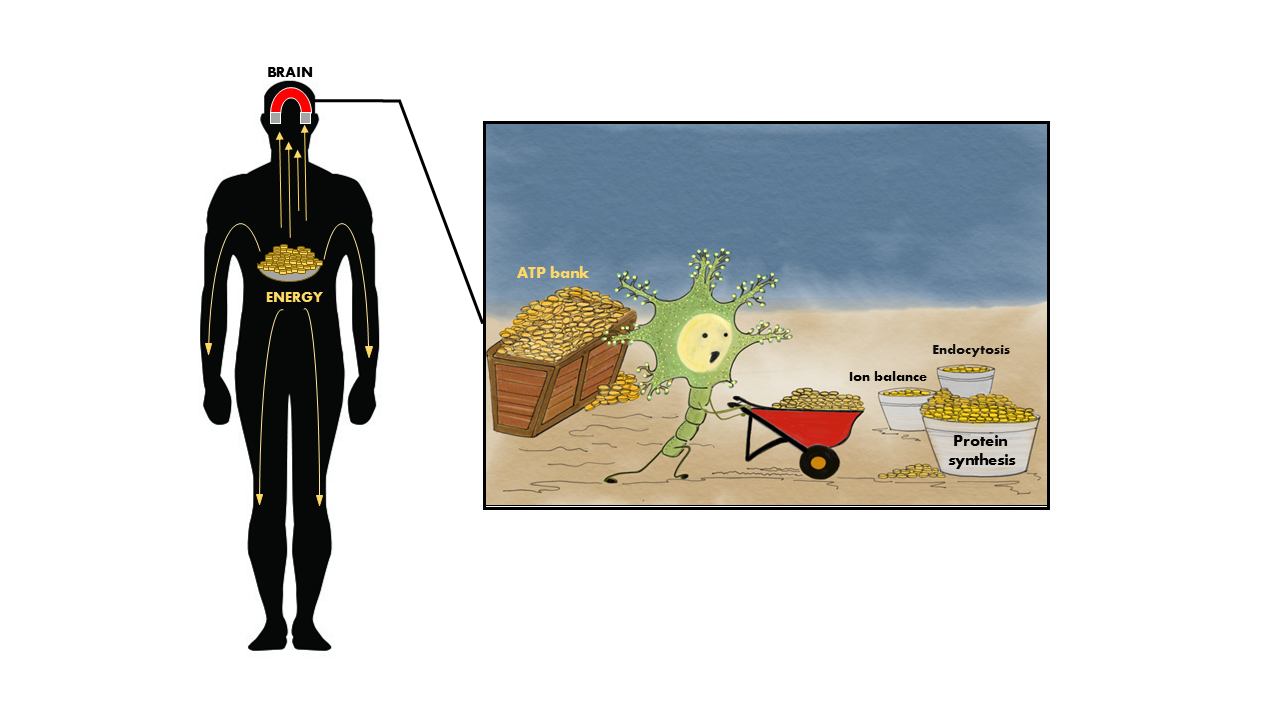 The adult human brain is an amazing organ that forms the primary part of the central nervous system along with the spinal cord and nerves that run throughout our body. Apart from controlling all functions of our body, the brain also interprets information from the outside world through the five senses, often all at one time.

As the most complex organ, the brain is made up of more than 100 billion neurons that communicate in trillions of connections called ‘synapses’. Although it is ~2% of our total body weight, the brain surprisingly consumes more than 20% of total metabolic energy. This energy consumption is mostly associated with those regions of the brain where high neuronal activities can be observed. Until recently, it was thought that the brain uses the bulk of the energy to fuel electrical impulses, which neurons employ to communicate with one another. It turns out, though, that this is only a part of the entire story. Dr. Ravi Muddashetty and his group in the DBT-funded, multi-institutional Centre for Neurodevelopmental Synaptopathies (CNS) at inStem has been working to explore the exact nature of the cellular and molecular processes underpinning the metabolic energy supply to the brain. Their recent work (which will be published in the journal of EMBO reports, June 2020) has shown that the brain activity requires synthesis of new proteins, which utilizes a significant proportion of the cellular energy in the form of ATP (energy currency). Ravi says, “When it comes to energy consumption, while the rest of the body is Maruti 800, our brain is like a Ferrari.”

A neuron or a nerve cell is the basic building block of the nervous system. These are electrically excitable cells that function to process and transmit information throughout the body. For neurons to communicate, they need to transmit information both within the neuron and from one neuron to the next. This process uses both electrical signals as well as chemical messengers. Each neuron makes connections with thousands of other neurons and forms the ‘neuronal network’. Synapses are the sites of connection through which neurons ‘talk to each other’. This ‘conversation’ between the neurons is solely responsible for learning, memory and various other tasks that the brain performs. The signalling at the synapse is mediated by chemical messengers called neurotransmitters. First, the electrical signal is converted to a chemical signal when it reaches the synapse. It is then conveyed to the next neuron through neurotransmitters which bind to their respective receptors. This is the primary mode of communication within the brain.

The latest work from Ravi’s group affirms that the interpretation of such incoming signals requires the synthesis of large number of proteins. Further, their work demonstrates the synthesis of new proteins to be a major source of energy drain at the synapses, which partly explains the high energy demand by the brain. “Newly synthesized proteins at the synapse play a crucial role in generating the response for neuronal activity which further determines whether the response for a certain stimulus should be amplified or reduced. This, in turn, defines whether the second neuron should fire and to what extent,” says Ravi.

Glutamate is one of the major neurotransmitters in the vertebrate brain. When glutamate reaches the second neuron at the synapse, the response it generates depends on the kind of receptor it binds with. There are two major class of glutamate receptors, namely NMDAR and mGluR, which are important in this context. In the current research, the authors found that these receptors have distinct kinetics by which they regulate the synthesis of new proteins, thus influencing the energy level accordingly within the nerve cells. ‘’This information may help us to better understand the mechanisms of synaptic plasticity that these receptors bring in”, adds Sudhriti Ghosh Dastidar, a doctoral student and first author on the publication.

Protein synthesis is an energy-demanding process and there is a strict control on protein synthesis in most of the cells of our body, linking it directly to the energy availability in the form of ATP. A protein molecule named AMP-activated protein kinase (AMPK) is an important control mechanism and blocks protein synthesis upon energy depletion. In the brain, however, the usual function of AMPK is changed such that it behaves faithfully to neuronal signalling. To allow protein synthesis, neuronal activity keeps AMPK silent even when energy levels drop. These observations help in explaining why the brain needs so much energy, in general.

“Understanding protein synthesis regulation is the light we require to illuminate the molecular mechanisms of memory”, says Ravi. Identifying the crucial link between activity-induced protein synthesis and energy metabolism in neurons is, thus, an important outcome of this research work. This may prove to be crucial in understanding the pathophysiology of various neurodevelopmental and neurodegenerative diseases such as Autism, Alzheimer’s disease and Parkinson’s disease in the future.