In Drosophila melanogaster, definitive haematopoiesis takes place in "lymph gland". It harbours progenitor cells whose development controls the growth and formation of mature blood cells. With respect to its development, neurotransmitters have emerged as regulators of blood-progenitor development and function. In this study, Dr. Tina Mukherjee’s Metabolism and Development (MAD) lab at inStem investigated the neurotransmitter dopamine and showed that progenitors are self-sufficient with regard to synthesizing it. They have modules for dopamine sensing through the receptor and transporter. They found that modulating expression of these components in progenitor cells affected lymph gland growth, which suggested its growth-promoting function. Cell-cycle analysis of developing lymph glands revealed a requirement for intracellular-dopamine in moderating the progression of early progenitor cells from S-G2 phase of cell-cycle, while activation of dopamine receptor signalling later in development regulated their progression from G2-M. The dual capacity in which dopamine operated intracellularly to coordinate S-G2 transition and extracellularly in G2-M transition, was critical for lymph gland growth. Overall, a non-canonical use of dopamine in the myeloid system shows an uncharacterized function of intracellular-dopamine in cell-cycle phasing with outcomes on hematopoietic growth and immunity. 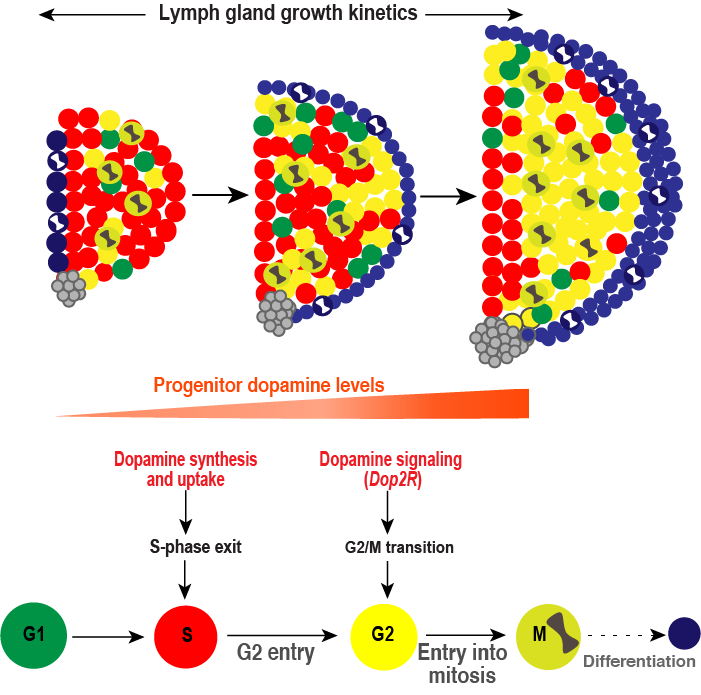