Our understanding of physiological consequences to the sense of smell i.e. olfaction brought about by sensing specific environmental odours is mostly limited to animal behavioural responses. While favourable odours are thought to mediate attractive animal behaviour, aversive odours trigger escape responses. Developmental regulation of odour-sensing however, remains poorly characterized. In this regard, the importance of olfaction on immune function has been reported in multiple and diverse contexts. Rats, which cannot process odours because of surgical ablation of the olfactory bulbs, show changes in humoral and cellular immune response, activation of inflammatory system, and blunted immunity to further immune challenge. More interestingly, research has noted that odorant inhalation can regulate immune reactions and certain odorants can mitigate the effects of stress on immune reactions. Although these scenarios reveal connection between smell and immunity, the precise understanding of olfaction and immune system cross-talk in development and infection remains poorly characterized. How specific this cross-talk is and how olfaction mechanistically and physiologically connects with the immune system are questions that remain unaddressed.

Tina Mukherjee and her group at MAD (Metabolism and Development) lab of inStem have explored the connection between olfaction and the cellular immune response in Drosophila, which is a well characterised and a genetically tractable organism. Drosophila have been effectively employed to uncover long range multi-organ cross-talk and analysis across developmental time scales, both of which are challenging in higher vertebrates. Through earlier work it was known that odour sensing in Drosophila is essential for the maintenance of blood progenitor cells in an undifferentiated ‘stem-cell like’ state. This observation positioned olfaction as an important sensory cue in blood development. Using this information to launch their studies, Dr. Mukherjee and her group at inStem undertook a thorough in-depth exploration of possible cross-talk. The exciting outcomes from their work are described here.

Their study dissect the different components of the olfactory system and track immune cell response in development and immune-challenged conditions. They observed that animals genetically manipulated so that they are unable to smell odours or those reared in conditions lacking odours, failed to sustain an active pool of blood progenitor cells. These animals eventually lost their potential to generate a specialized immune cell type termed ‘lamellocyte’ whose formation was necessary to combat infections by parasitic wasps. This research finding showed a developmental role for odours and their sensing in building a competent repertoire of immune cells that can respond when needed.

Drosophila development begins from the adult female fly laying its eggs, which hatches as first instar larvae that begins to feed and grow. These growing larvae sense various environmental odours via olfactory system whose functioning is much akin to the mammalian olfactory system. Mechanistically this current study shows that larvae sensing odours stimulate the release of a certain metabolite called GABA (gamma aminobutyric acid). The release of GABA into the larval blood, otherwise known as haemolymph, allows it to be circulated and reach organs distant from brain. Further, within the larvae, there is lymph gland – a specialized hematopoietic organ, where formation of new blood cells occurs. Mature blood cells arise from an undifferentiated and uncommitted pool of blood progenitor cells which reside in this lymph gland. GABA released from the brain is internalized by blood progenitor cells of the lymph gland and catabolised through a specific metabolic pathway called the ‘GABA-shunt’. This metabolic capacity of blood progenitor cells makes them competent to differentiate into lamellocytes. 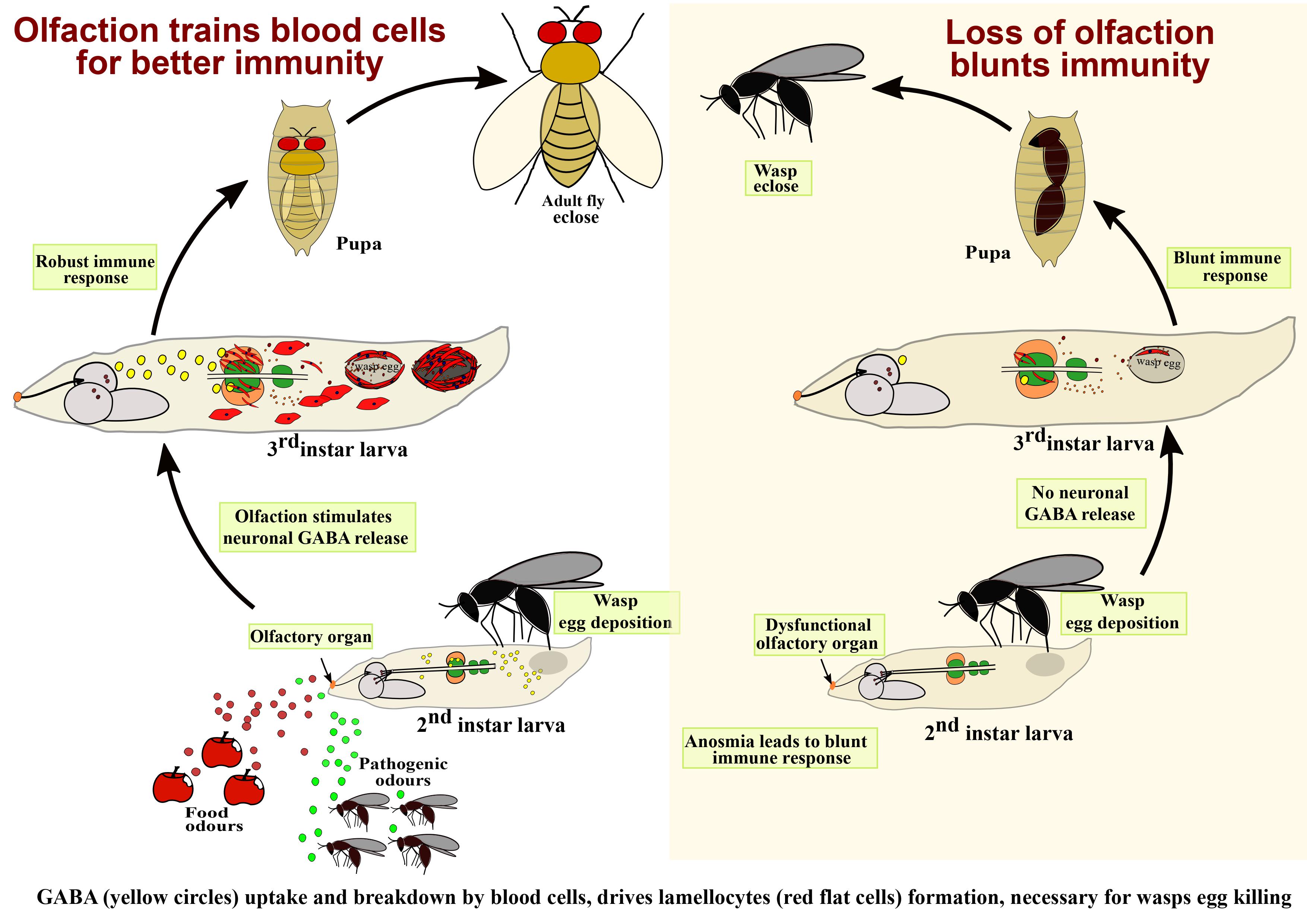 The loss of olfactory inputs in animals lacking olfactory receptors prevents neuronal secretion of GABA. As a result, blood progenitor cells are unable to activate the GABA-shunt and prime the immune response, compromising lamellocytes generation. Such Drosophila larvae are more vulnerable to parasitic wasp infections. Interestingly, larvae that pre-sense predatory wasps in the environment early in their development, mount superior immune responses and show robust immune functions upon infection. The group showed that prior sensing of such pathogenic odours during larval development boosted GABA production in the brain, allowing progenitors to sense and metabolise more GABA. Consequently, this boosted immune potential of progenitors allowing a faster and efficient immune response when animals are challenged with the predatory wasps.

Overall, the research by Dr. Mukerjee and her group broadens our understanding of the olfactory modality beyond behavioural adaptation. Their work provides an unconventional developmental and stress-sensing role for the olfactory system in sustenance of a competitive repertoire of immune progenitor cells. The use of odours to train immune cells and improve function as an approach to combat diseases or infections is an interesting possibility arising from this work.

Sniffing out the enemy
Science Journal